In our quest for finding a homestead location, I’ve begun to reach out to some of the local homesteaders and permaculturalists via the internet. In my search I stumbled upon The Garden’s Edge and I was so moved by what they are doing both here in New Mexico and in Guatemala that I asked Sarah Montgomery, the founding director of The Garden’s Edge if I could feature her organization here. I’ve copied their Mission Statement and About Us here, as well as an article written published in The Albuquerque Journal.  I would encourage everyone to check out their website, see the beautiful work they are doing. If you are inspired, I encourage you all to get involved.

Garden’s Edge is a 501 (c)3 non-profit corporation that works in New Mexico and Guatemala to revitalize local culture and economy through projects in sustainable agriculture and environmental education.

The Garden’s Edge was formed in 2007 by a group of farmers and social activists concerned about environmental degradation, global climate change, disappearing small-scale farmlands, and the erosion of indigenous cultural knowledge.

A strong desire to work towards creating a more sustainable future led founding members Sarah Montgomery and Aaron Lemmon to Guatemala in 2003 where they started a project to help indigenous farmers preserve their traditional seeds and agricultural practices.

This project called, PPAS (Proyecto de Producción de Alimentos y Semillas) The Food and Seed Production Project, was initiated as an alternative to the conventional international aid model. Conventional aid projects often create dependency in rural villages by importing technologies, crops, livestock and food aid from the west. This model often contributes to the erosion of indigenous cultures and disappearance of native plant and animal species by placing little or no value on traditional knowledge, crops, seeds and customs.

PPAS’s first focus was on food security and soverngtey in rural villages. Home gardens were planted with native foods and medicines that were well adapted to local environmental conditions and familiar to villagers. PPAS helped bring back many highly nutritious Maya food crops and medicines that were disappearing from the region. Crops such as Amaranth, native corns, beans, and vegetables such as Chipilin, and Macuy (Hierba Mora) are once again abundant in village gardens. They are replacing the introduced western hybrid varieties that require large amounts of agro chemicals and fertilizers to grow. Sustainable food and seed production has helped village families break their dependency on western aid projects and government handouts and has reduced seasonal work migration to large plantations and urban factories.

The Garden’s Edge has expanded into New Mexico and is working with sustainable agriculture, and environmental education.

An article that was published in the Albuquerque Journal:

Mayans find striking similarities between their agricultural traditions and U.S. Native American ways, and are fighting to keep them alive

The story of how six Mayan farmers ended up sharing farming tips with native communities in New Mexico dips into tragic Guatemalan history, the pitfalls of international aid and the roots of indigenous culture.

Edson Tomás Xiloj Cuin tells part of the story. Xiloj Cuin, the director of the Qachuu Aloom (Mother Earth) Association in Rabinal, Guatemala, is a round man with a wide smile. On a late summer day, he stands at the entrance to Chispas Farm in Albuquerque’s South Valley, where he is winding down a threeweek trip to New Mexico and Arizona with a fundraising event. In a few minutes, he will describe to Albuquerque residents how farming helped revive community life in Rabinal.

Xiloj Cuin relives his trip with relish. This past July, Xiloj Cuin joined the 13th Annual Traditional Agriculture/ Permaculture Design Course, organized by the Traditional Native American Farmers Association, to learn about Pueblo farming. Growing up in Chichicastenango, Guatemala, Xiloj Cuin’s grandparents told him stories they had heard about the commonalities between Mayan traditions and their Native American neighbors in the U.S. Once in the U.S. for the first time, he saw striking similarities in farming and cultural practices that convinced him the stories were true.

“It’s like my grandparents’ stories came to life,” says Xiloj Cuin, in Spanish.

Xiloj Cuin might never have arrived in New Mexico if Sarah Montgomery had not had what she says was a vague plan to use sustainable farming to help women widowed during Guatemala’s civil war. Montgomery, 31, an Albuquerque native who studied sociology and women’s studies at the University of New Mexico, first visited Rabinal in 2000. She wanted to learn Spanish and had met Carlos Chen, a Guatemalan indigenous rights activist from Rabinal, in Albuquerque. But it was a brief visit, and she soon moved to Costa Rica to teach environmental education.

Still, Montgomery couldn’t get Guatemala out of her head. Two years later, she returned to Rabinal, hoping to work with widows. She met with little success until a war survivor named Cristobal Osorio Sanchez knocked on her door. The first thing he said was, “my dream is to preserve the agriculture of our ancestors.” It was kismet.

Osorio Sanchez doesn’t give all the details, but what he does say is scary enough. He survived four massacres by the Guatemalan military in Rio Negro, a village along the Chixoy River, where more than 400 Mayan residents were killed in 1982. Between 1976 and 1983, Guatemala built the Chixoy hydroelectric dam with funding from the World Bank and the Inter-American Development Bank. Construction began without consulting families who would be displaced by flooding from the project, Osorio Sanchez says.

When they refused to leave, the first group of 73 men and women were killed. Soon after, 177 women and children were massacred at Rio Negro. Osorio Sanchez went to a nearby market and returned to find 16 family members dead, including his mother and pregnant wife. Two other massacres followed. According to the Guatemalan Commission for Historical Clarification, more than 200,000 people were killed or disappeared during the war, 83 percent of them Mayans.

“The war destroyed many of our lives,” Osorio Sanchez says. “We decided to create a community organization that would try to rebuild that.”

Osorio Sanchez, forced to move to the larger town of Rabinal with other displaced Rio Negro residents, encouraged locals to return to traditional Mayan farming practices and refrain from using the fertilizers and pesticides promoted by some aid groups and the government. Practices like planting with the moon cycle and using medicinal plants had been lost in many families, Montgomery says.

The next piece fell into place when a feisty woman named Maria Magdalena Alvarado Ixpata, who now works with Xiloj Cuin’s organization, stopped Montgomery in the street and asked her if she needed help. The two became fast friends. Alvarado Ixpata introduced her to several women’s groups working on human rights issues, who then began attending workshops with Osorio Sanchez.

With Osorio Sanchez, Montgomery started the Proyecto de Producción de Alimentos y Semillas, or the Food and Seed Production Project, which focused on planting home gardens and teaching locals to gather, store and save seeds. The plan was to reduce dependency on imported crops and food aid, and reduce the number of hybrid seed varieties that had already put many native plants in jeopardy.

“The fear is that if biodiversity and cultural knowledge disappear, when those go, so does a whole piece of history,” Montgomery says.

The seed project evolved into Qachuu Aloom (Mother Earth) two years ago, which now includes a livestock, microloan and seed business. With a seven-person staff and $25,000 budget, Qachuu Aloom works with 120 farmers, 80 of them women, in 14 communities. After six years in Guatemala, Montgomery moved back to Albuquerque in January. She founded the nonprofit Garden’s Edge to continue her work in Guatemala by focusing on sustainable farming in New Mexico. Her newest passion is fostering cultural exchanges like the one that brought Mayan farmers here.

“All the knowledge is out there, it’s just making the right connections,” she says. “I feel like that’s my job.”

Before she arrived in New Mexico, Alvarado Ixpata says she envisioned “only hamburgers and pizza. … But we saw another reality,” she says. “It was an amazing and marvelous experience for all of us.”

During the visit, the Guatemalan farmers saw similarities they never imagined between their wet, hilly gardens and southwestern farms. When the group visited the Tesuque Pueblo farm of Clayton Brascoupe, they found corn, beans and squash planted together, a configuration Guatemalan farmers call milpa. Brascoupe, program director for the Native Farmers group (TNAFA), says the plants support each other — beans add nitrogen, corn drains nutrients and squash reduces weeds.

At the Hopi Indian Reservation in northern Arizona, the Guatemalans visited terraced gardens created to conserve water. They were surprised to see crops like chile and onions thriving, according to Leland Dennis, coordinator of the Natwani Coalition, an agricultural component of the nonprofit Hopi Foundation.

Though Arizona is dry, as the Guatemalan group arrived at the reservation, it started pouring.

“It was very inspirational, it felt like they were bringing the rain to us,” Dennis says. “I felt like I was amongst my own people.”

Farm design was just one aspect of the workshop. Sustainable farming can help maintain indigenous culture, says Xiloj Cuin. “We are in agreement about the need to preserve our culture.” 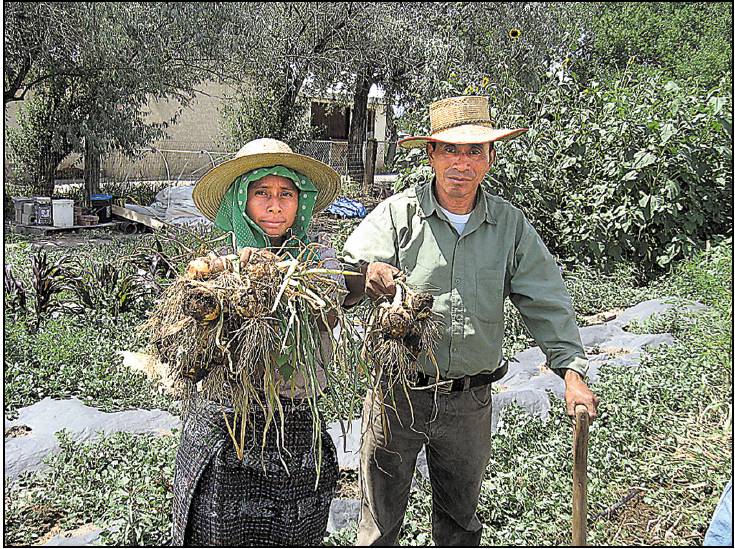 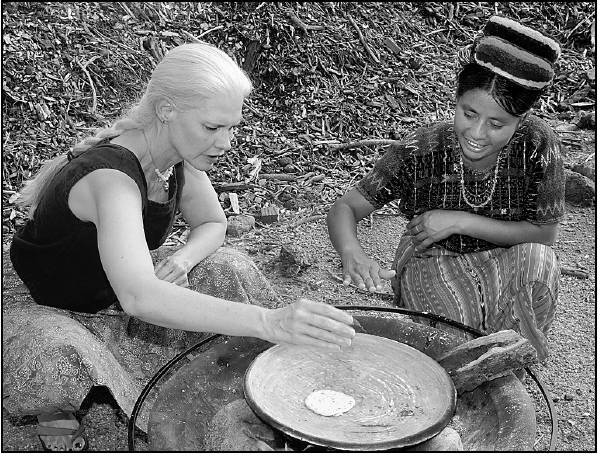 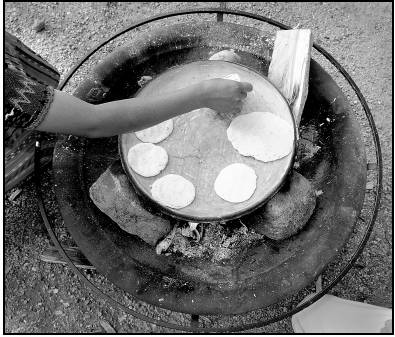 Silvia Sic Alvarado, who works with the Qachuu Aloom Association in Rabinal, Guatemala, cooks tortillas at Chispas Farm in the South Valley.